This journal has been placed in memorial status. New entries cannot be posted to it.

Even while it was disappointing not to find any carousel ad the new Luna Park in Coney Island earlier this week, while I was over at the History Project I did learn that a brand new carousel did open up just outside the Chelsea Piers in Manhattan. I had known that this one was on its way but was surprised that it was now up, though they had been expediting the Hudson River Park project for the past couple of years now.

So I dropped by Pier 62 where the carousel was turning and it was really quite a sight to see. It's a 3-row menagerie built by Carousel Works of Mansfield OH and populated by hand-carved figures representing the natural wildlife that can be found all the way up the Hudson Valley...with the exception of the two unicorns of course--I'm sure on board to satisfy the equestrian purists such as my self--though they were adorned with butteflies in keeping with the river native species theme. And these rideable species included foxes, raccoons, rabbits, bears, deer, coyotes, ducks, turkeys, and even assorted fish. If you were unsure of exactly what animal you were riding, all you had to do is look up and read the critter's species on one of the cross beams. Speaking of which, interestingly this carousel had no rounding boards nor inside panels, or even traditional music (they played current pop music from a portable device).

you know some of us fursuiters ought to go on down there and hop a ride on our matching species...what a fun sight that would be! 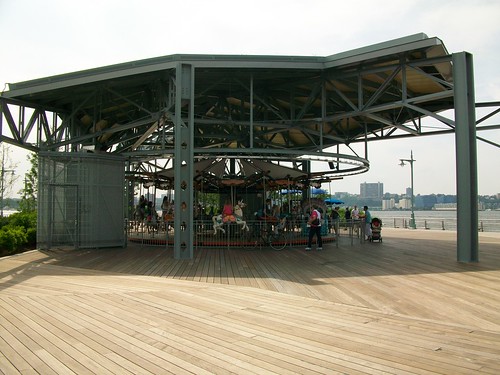 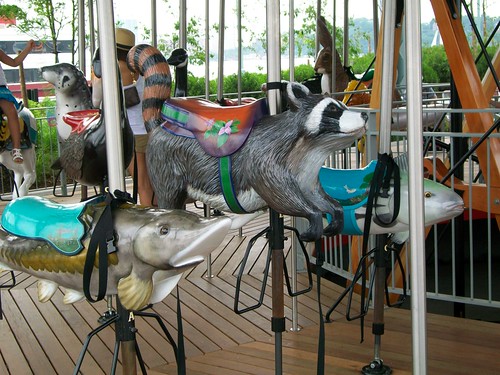